Early this morning I was driving to Mt. Sterling. The sun was warming the earth but the fields were still white with a heavy frost .A thin layer of fog was rising from a lake surrounded by hay fields.

A flock of geese, maybe as many as twenty, circled overhead and had set their radar beacon on the lake. I pulled the truck over into the emergency lane to watch something spectacular happen.

The geese continued slowly, in a lazy “V” formation, to circle until they found their path of final approach.  They leveled off slightly adjusting the “V” until they were in a straight line with the main lake. Then their wings stopped flapping as they were starting their glide pattern. 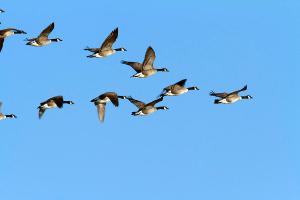 Flying slowly found each bird, making fine adjustments in their wings, descending toward the still, glassy water. This was much as I would do in my Cessna 150 approaching the runway. Maybe a full minute passed and they were slowing even more, just three feet off of the water.

The “V” formation, still very much visible above the glistening smooth water. Now all the birds, with three-foot wing spans, gracefully flying close together approached the water.  All the birds now, making many small adjustments of the edge of their wings and even individual tail feathers, silently approached their stall speed where they would stop flying and be on the water.

Wow! Wow! Wow! All twenty geese, each an individual flying creation, in total cooperation with each other made a perfect,, beautiful, fantastic landing on the mirroring lake.

How did they do that?  Can us humans learn how to cooperate with each other like that?  I know we have many times over the centuries and perhaps some believe we never have and never will be able to do it.

Right now in Eastern Kentucky, Powell, Lee, Wolfe, and Menifee Counties are doing it and advancing their tourism base. We are working with each other and with communities outside our area at being the very best to the people who come here to vacation or to just take a weekend off.

At Bowen Farm we are cooperating with each other to make our guests stay here the best they have ever had.  We are doing the same with the trail runners of the Rugged Red, Red River Gorge Trail Half-Marathon.

While staying here, at another cabin, hotel, or campground, taking the Red River Gorge Zip-LIne or running the Rugged Red, hiking our incredible trails, or rock-climbing, if you have an idea that will help us accommodate you even better, let us know.